The rains of Athens: Stopping the floods

In ancient Greek mythology, when Poseidon god of the sea, lost the competition to have patronage over Athens to the wise and peaceful goddess Athena, he was furious and flooded the plains of Attica.

Today, Poseidon’s fury might have abated, but the flooding of Athens and the Region of Attica continues to be a major problem. Despite the popular perception of Greece as a warm and dry country, heavy rains deluge the capital from time to time.

Like most cities, Athens has a network of aqueducts, drainage systems and hidden rivers which help to channel water out of the city. But the infrastructure is old and ineffective. Blocked or non-existent drains can lead to flooding in urban areas.

When it rains the usually dry and dusty Athenian streets can become murky rivers overnight, cutting off access to entire blocks and businesses. One particularly rainy weekend late last November saw drivers trapped in their cars, with the fire brigade receiving over 200 calls to pump water from people’s homes.

That’s why the Region of Attica has made it a priority to use local and European funding to improve the flood prevention system in and around Athens. 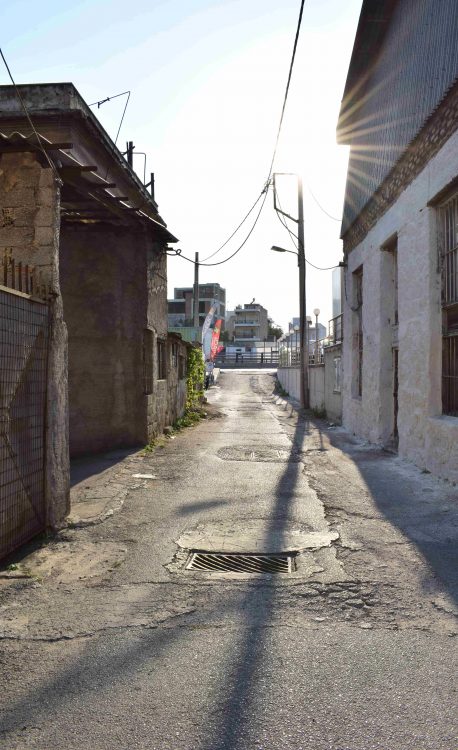 Narrow streets and poor drainage contribute to the flooding

An enormous and ambitious project, the new flood prevention network will build new storm water network over 7km across the municipalities of Nikaia-Agios, Ioannis Rentis and Tavros-Moschato where over 500,000 people live and commute every day. The flood prone small streets and old industrial areas will be linked up the Kifissos River through a series of drains and pipelines to channel water off the streets and squares, away from metro lines and markets, and out of the city. But this is no easy feat and will require €12.5 million euros until 2019 to complete.

The contractors will face some major challenges with a plethora of existing infrastructure networks such as water supply and sewage pipes that need to be moved or replaced. The area includes the Central Market Hall of Athens which supplies most of the Greek population with fresh fruit and vegetables. Which means traffic congestion will affect the surrounding streets because of the shear amount of industrial and commercial activities in the area. And finally, the old Long Walls along Piraeus Avenue which used to protect ancient Athens, need to be bypassed in order to build the storm-water network for a drainage basin which exceeds 180 hectors.

With stagnant foreign investment and a national debt of 185% of GDP, the financial situation in Greece remains exceptionally difficult and public works have been significantly affected. Yet, new vital infrastructure is sorely needed.  And with the prevalence of massive flooding and its effect on local communities, it’s absolutely essential that the money meant to stop the floods is not lost to corruption.

Greece is no stranger to public procurement scandals. In May 2016 the new Hellenic Competition Commission was launched and is conducting an investigation into allegations of collusion around tenders for public works including road construction, rail transport, metro rail and concession projects. The investigation is looking at the role of major constructing companies which allegedly participated in bid-rigging for public construction works between 1989 and 2016.

High profile prosecutions and reforms, such as the new e-procurement system, are recent attempts to change the situation of corruption in public procurement. But it’s not just the risk of corruption. With such little money available it is essential that every euro that the authorities have is spent efficiently, effectively and in a way that makes a difference to people’s lives.

That’s why this project was chosen by Transparency International Greece and the European Commission to be part of a new Integrity Pact. This Pact is an agreement which provides Transparency International with the right to monitor specific commitments undertaken by the public body managing a tender, and the bidders, not to engage in any form of bribery, collusion or malpractices for the duration of a project, from tendering to completion.

With support from the European Commission, Integrity Pacts allow civil society to have access to information about the development of the public work through reports highlighting technical, legal and financial elements of the project; they are designed to bring transparency and social accountability through introducing best practices to public procurement.

Transparency International Greece are monitoring the tendering process and the execution of the project, to ensure proper accounting and assess the impact on local communities. The Integrity Pact aims to help this project develop with increased effectiveness by identifying possible irregularities and submitting relevant recommendations to make sure the project is delivered on time and to cost.

All of which is vital to ending the flooding of Athens and the damages it has on peoples’ properties and livelihoods. Particularly when the amount of money available is so low and the stakes are so high.

A guide to understanding Integrity Pacts, for civil society, contracting authorities and business. Together we can end corruption in public procurement.