Photo by Chris Davis via Unsplash

How many lobbyists are there in Brussels?

It is usually one of the first questions that people have about lobbying in Brussels. How many lobbyists are there actually? How much money do they spend? And what exactly are they working on?

It is also one of those questions that is still impossible to answer precisely. Estimates are commonly somewhere around 30,000 and we are going to show why this is probably a good estimate. Until a reliable mandatory lobby register is finally introduced in Brussels, how can we estimate the number of lobbyists? 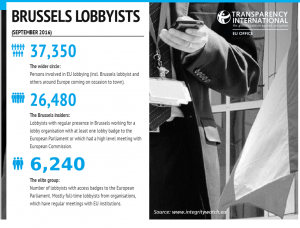 This is the number of people that currently hold a lobby badge to access the European Parliament. These have all shown up personally at the Parliament within the last year. This is currently the lowest estimate as not everyone that is lobbying in Brussels has a badge for the Parliament. Many lobbyists might work with the other institutions, or only access the Parliament on occasion as a visitor or supports lobbying activities in a more indirect fashion through consulting, legal advice or communication support.

The 9,860 organisations currently registered on the voluntary EU lobby register declare a total of 91,251 people involved in their lobbying activities towards the EU institutions. Given the voluntary nature of the register and poor monitoring of the data, this number is, however, only partially reliable.

A closer look at those indicating the highest numbers immediately shows that a group of universities and a few others seem to have trouble with the numbers of people involved in their lobbying and list a number in the hundreds or even thousands. At the same time, there are still quite a few organisations that refuse to join the voluntary register or those that have signed up but under-declare the number of staff they have working on EU lobbying.

Our estimate for people involved in EU lobbying: 37,351

Lobbyists with a regular presence in Brussels: 26,483

Not all lobbyists above are based in Brussels or travel here regularly. With further filtering for those organisations that have at least one current access badge for the EP or have had one high-level meeting with the Commission in the last year, we find 26,483 lobbyists or 11,222 full-time equivalents.

Based on these findings, a conservative estimate for the number of Brussels lobbyists is 25,000 with a further 10-15,000 lobbyists across Europe that occasionally influence decisions in Brussels as well.

Transparency International EU has published new analysis of lobbying in Brussels on 1 December 2015. It reveals that the overwhelming majority of lobby meetings held by European Commissioners and their closest advisors are with representatives of corporate interests.