Is the EU exporting corruption across the Aegean?

There’s only six kilometres in the strait of Mytilene between Lesvos in Greece and the Ayvalik islands in Turkey. People traffickers charge desperate refugees thousands to make the short, dangerous journey. Corruption fuels their business: people have to look the other way for the refugees to take to the seas.

European Union (EU) countries are struggling to cope with largest mass migration since the Second World War and are desperately looking to Turkey for a solution. But paying Turkey billions to house more refugees and tighten its borders while promising it a faster track to EU membership has its own corruption risks that the EU is not confronting.

The EU’s core values including freedom of speech, the rule of law and judicial independence are fast falling by the wayside in Turkey as the president, Recep Tayyip Erdogan tightens his grip on power. Without these values, it is impossible to stop corruption. And it will only get worse.

Shortly before the previous two summits between the EU and Turkey, Turkey cracked down on media freedom and the last time EU leaders met with President Erdogan in November, the Turkish authorities had just arrested two editors from the Cumhuriyet newspaper.

A fortnight ago under umbrellas and a sea of red flags protestors braved water cannons and tear gas to demonstrate against the government’s takeover of the opposition Zaman newspaper.

Freedom of expression is a fundamental right, supposedly guaranteed by the Turkish constitution as is protection of the media. A recently enacted controversial law now allows the government to switch Twitter, Facebook and other social media platforms on and off as it sees fit.

Fourteen journalists were in Turkish jails at the end of 2015, and the country remains one of the top persecutors of journalists worldwide, according to statistics from the Committee to Protect Journalists. Turkey ranks 149th out of 180 countries on Reporters Without Borders 2015 World Press Freedom Index.

Turkey has also dropped eight points on Transparency International’s Corruption Perceptions Index between 2013 and 2015. It has no independent anti-corruption body, despite having committed to developing such a body in line with the UN convention against corruption (UNCAC). The country’s Ombudsman stayed silent as media outlets, journalists and bloggers have been persecuted. 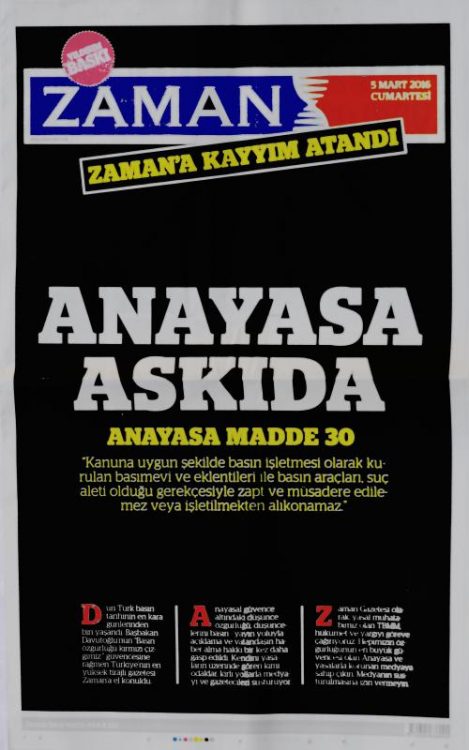 The deal with Turkey will involve providing €3 billion in humanitarian aid (Turkey is asking for €6 billion) as well as an enormous population swap of migrants and refugees. It will provide visa-free travel to the EU’s Schengen area for Turkish citizens as soon as June. At the heart of the deal is the promise to speed up Turkey’s stunted EU accession process. But there’s no mention of fighting corruption. On Tuesday MEPs called for any deal on refugees to be “uncoupled” from Turkey’s accession ambitions.

As accession talks re-open individual areas of negotiation or ‘chapters’, Brussels must place a strong emphasis on chapters 23 and 24. These chapters stipulate provisions for judiciary and fundamental rights and justice, freedom and security. They lay the foundations for an accession country’s anti-corruption and good governance measures to meet EU standards.

But if anything Turkey is currently drifting away from these standards.

In 2014, for example, corruption investigations into 53 officials, many against ministers, relatives of cabinet members and other associated businessmen and public officials, were dropped. And the European Commission’s own progress report for Turkey in 2015 notes: “judges and prosecutors have been under strong political pressure… …Substantial efforts are needed to restore the independence of the judiciary.”

The EU should not shut its eyes to these problems now simply for expediency. Corruption is a problem in Turkey and this must be addressed head on. The money for border security and housing refugees must not be allowed to disappear into the pockets of the corrupt.

The EU must also ensure that proper anti-corruption standards, in line with international best practices, are upheld for border and police officials. Why, for example, have the Turkish police and border guards failed so obviously to pick up the traffickers who are exploiting the human suffering of the desperate refugees?

As EU leaders sit to hammer out the fine details of this deal it is worth remembering the words of European Council President Donald Tusk at the G7 summit last summer: “We need to fight corruption in its all dimensions, no matter how powerful the actors.”

From this crisis to the next the EU must look to the long term and remember that good governance, freedom of speech and the rule of law are essential for stability at home and abroad. Just as a virus thrives in a weak immune system corruption spreads in the absences of strong and independent media, judiciary and a culture of transparency.

Either side of the strait of Mytilene, the EU must not drop its commitments to democracy, freedom of the press, judicial independence and the rule of law.