Gulnara Karimova, daughter of former President of Uzbekistan has led many lives. Once called the “Uzbek princess”, she has been a pop singer, fashion designer, owner of scents and gem brands and UN ambassador until her fall from grace in 2014.

Revelations showed her being involved in a vast network of corruption tied to public procurement in the telecommunication sector. She is accused of taking bribes from Swedish, Russian and Dutch telecom companies in exchange for licenses to operate in Uzbekistan. It is estimated that she received the equivalent of at least USD 1.3 billion of payments and shares.

Gulnara’s corruption has had very concrete implications for Uzbek people. It is believed to have contributed to Uzbek telecom users paying among the highest rates in the world for mobile phone services.

The proceeds of Karimova’s dealings were stashed away in banks, offshore companies, luxury properties and goods around the world including at least 9 EU countries (Belgium, France, Germany, Ireland, Latvia, Luxembourg, Malta, Spain, and – EU member state at the time – the UK).

The criminal investigations initiated in Uzbekistan led to her conviction for extortion and embezzlement in 2015.  Efforts to confiscate her corrupt wealth have been undertaken in a number of countries, including France, Switzerland, Sweden, the United States and the Netherlands. 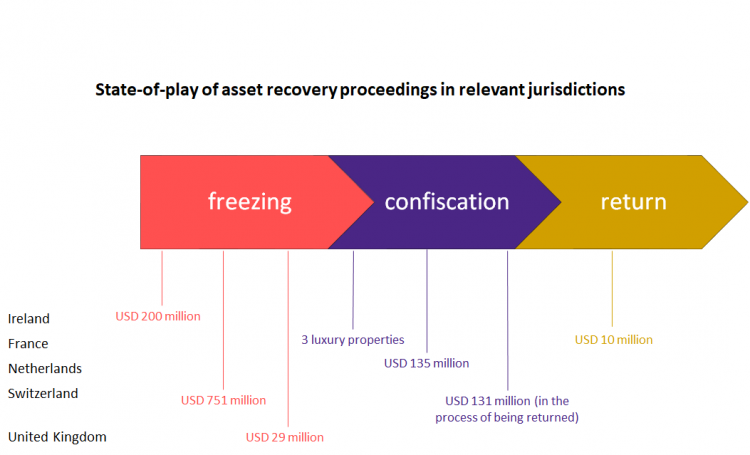 What happens to assets once they are confiscated?

What do you do when assets stolen from a country’s state coffers by corrupt individuals have been recovered and can now be returned  – but the government is still controlled by corrupt people? That’s the case of Uzbekistan, one of the most corrupt countries in the world. It scores just 25 out of 100 on Transparency International’s Corruption Perceptions Index, indicating rampant corruption in the public sector.

We have seen two different approaches to asset return in the Karimova case so far:

In May 2020, the Uzbek government acknowledged receipt of USD 10 million from the French authorities. This process was settled in haste to the detriment of transparency and accountability. In place of a trial in open court, the French authorities have preferred to expedite the matter in closed-door negotiations with the Uzbek state and the three civil real estate companies that pleaded guilty to having laundered money on behalf of Gulnara Karimova. A couple of months earlier, the NGO Sherpa, who joined the proceedings as a civil party since 2014, had temporarily lost its standing accreditation and could not participate in the negotiations.

The Swiss approach seems more promising. In September 2020, the Swiss government announced they had reached an agreement with their Uzbek counterpart for the return of USD 131 million, representing about 15% of the total amount of assets frozen by the Swiss government since 2012.

The Memorandum of Understanding signed between Switzerland and Uzbekistan incorporates commitments made in the GFAR principles, including principles of transparency and accountability, and for repatriated assets to benefit the Uzbek people – the victims of corruption –  through the improvement of their living conditions, strengthening the rule of law or fighting impunity in Uzbekistan. The agreement also provides for the effective participation of independent civil society.

This is an important step which may set a precedent not only for future restitutions by Switzerland but also by other countries involved in this case.

Transparency International EU calls on EU countries holding assets belonging to Karimova to follow a similar approach in the future, i.e. commit to principles of integrity, transparency, accountability in asset return and to the effective participation of independent civil society. In a recent report, the European Commission acknowledged insufficient results in terms of asset recovery across Europe and the need to modernise its asset recovery policy. In this endeavour, we urge the EU to address the last phase of asset recovery, i.e. the restitution of confiscated assets, and enshrine the  principles of integrity, transparency, accountability in EU law. This would help to ensure any future restitution process involving EU countries is managed in a transparent, accountable, coordinated and inclusive manner.

To find out more about asset recovery, join our webinar on 17 November. More information can be found here.

Asset recovery refers to the process by which the proceeds of corruption transferred abroad are recovered and repatriated to the country from which they were taken or to their rightful owners. TI EU advocates for a comprehensive reform of the EU...