Even though the importance of financial transparency is widely recognized, it seems unlikely that the German grand coalition would push public country-by-country reporting forward in the Council of the European Union, after Transparency International EU heard from German politicians.

On Wednesday 16 May 2018 Transparency International EU and Transparency International Germany hosted the event Germany’s global role in the financial transparency field with the support of European Movement Germany. The event, held in Berlin, brought the representatives of German government parties, opposition and civil society representatives together in a panel discussion. The participants discussed key corporate and financial transparency measures, in particular the ongoing negotiations on public country-by-country reporting (CbCR) requirements for big multinational enterprises in the EU, and Germany’s role as an international player in these discussions.

The panel participants agreed that sunlight is often the best of disinfectants for tax evasion and avoidance. The importance of tax transparency was recognised also as a key element for fair market and level playing field. As MP Lisa Paus from the Green party mentioned, tax avoidance and aggressive tax planning has led to the loss of billions of taxes historically. She addressed the systemic vulnerability in the current financial systems. Markus Meinzer from Tax Justice Network also stressed that the unfair situation damages especially the competitiveness of small and medium enterprises.

Public #CBCR already exists – in the banking & extractive industries. We have an historic opportunity to make public reporting standard for all industries – @lisapaus #Luxleaks #PanamaPapers #TaxTransparency

Prof. Dr. Heribert Hirte, MP and member of CDU, highlighted the alleged impacts of transparency legislation on competitiveness, as he saw that a different level of regulation for companies inside and outside the EU would place EU companies at a competitive disadvantage. However, civil society participants stated that no European companies, who have been subject to the existing public CbCR obligations in the banking and extractives sector, have struggled with competitiveness issues vis-a-vis their competitors outside Europe. Companies often already have access to each others’ tax data in the current situation, and public CbCR would mostly empower citizens and civil society.

Transparent and open tax information have also a huge impact to developing countries, as Markus Meinzer stressed. Elena Gaita from Transparency International EU also saw public CbCR as a good opportunity for the EU to show leadership, as it had previously done with transparency legislation for the extractives sector.

However, Dr. Walter-Borjans from SPD, did not bring positive news for the ongoing public CbCR negotiations. Despite SPD listing this issue as a priority in its electoral programme, it is not mentioned in the coalition agreement between CDU and SPD. The former Finance Minister of Nordrhein-Westfalen saw this development alarming, as he regarded the general public as the first victim of the lack of transparency.

Despite the public expression to tackle tax avoidance, the German grand coalition still seems to be reluctant to show this commitment in practice. Despite mounting evidence and loss of tax revenue, it looks unlikely that the SPD is going to resolve the current deadlock in the public CbCR negotiations.

The current apathetic approach is likely to allow  un-transparent aggressive tax planning and profit shifting to continue, while keeping citizens in the dark about multinationals’ tax payments.

The recorded stream of the event can be accessed via Youtube. 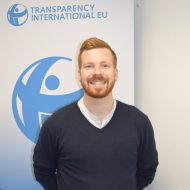