Photo via Kristine Weilert via Unsplash

Ensuring integrity in REDD+ and Forest Climate Finance initiative aimed at Reducing Emissions from Deforestation and forest Degradation: Ensuring integrity in REDD+ and Forest Climate Finance – assessing and tackling corruption risks in the forestry sector. The event was hosted in the European Parliament by MEPs Catherine Bearder, Benedek Javor and Eva Joly. With a number of experts, from the UN, European Commission and European Forest Institute officials and civil society, we discussed how corruption risks in timber-rich countries can be safeguarded by the implementation of effective accountability systems.

Environmental crime is growing at an alarming pace – two to three times faster than global GDP. Illegal logging, caused by corruption and organised crime, is worth an estimated $50-152 billion annually. Deforestation as a result of illegal logging is driving climate change as the second biggest contributor to global warming, displacing communities and endangering ecosystems.

That’s why the United Nations created REDD+, a global initiative that compensates tropical, forest-rich countries to keep their trees standing in order to offset CO2 emissions. REDD+ has huge potential. If it works, it could save forests, reduce carbon emissions and protect the lives of millions. But there are big risks: what happens if money goes missing along the way? Major corruption challenges in REDD+ concern the management of these new streams of money and the sharing of financial benefits among local actors.

The forestry sector is one of the most prone to corruption: up to 90% of logging is considered to be illegal. High rates of deforestation are to be found in countries with high levels of corruption, such as the Democratic Republic of the Congo, Ghana and Cameroon, which all score below 50/100 on our annual Corruption Perception Index. 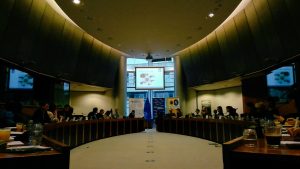 During the event our colleagues Susan Kirimania from Transparency International Zambia reported on how the bribery of police officials and law enforcement bodies is at the root of the depletion of Zambia’s forests. Michael Okai from Transparency International Ghana pointed out that the deforestation rate in his country is growing by 2% each year, due to land clearance for the production of cocoa.

These examples were just the tip of the iceberg during the event’s discussions where we launched and presented the main findings of our most recent report, REDD+ and Corruption Risks for Africa’s Forests. The report is the culmination of a three year project aimed at assessing existing corruption risks in the forestry sector across different African countries, which was carried out by our national chapters in Ghana and Zambia as well as Cameroon and Zimbabwe.

As MEP Benedek Javor described: “there is no silver bullet and perfect recipe for fighting corruption, particularly in the forestry sector.” But two issues have been identified as key during the discussion: participation and transparency. Local people must be involved in every step of decision making processes and must have adequate access to information, which will allow them to make informed choices. These two issues, however, are just pre-requisites in the fight against corruption.

For them to be in place, institutional and legal backing is an important and necessary starting point. The promotion of the fundamental rights of freedom of expression and the protection of whistleblowers for the reporting of corruption are crucial elements that need to be promoted beyond external monitoring systems and transparency laws and regulations.

However, it is also important to recognize that transparency on its own has limits in systems which have very little overall accountability. It needs to be coupled with targeted measures, such as the setting up of self-sufficient and independent anti-corruption bodies and independent grievance mechanisms as well as excluding politically exposed persons (PEPs) from obtaining forest licenses.

Alexandra Pardal from Global Witness pointed out how “it is not for lack of funds that forests are not being saved”. In countries that are at the bottom of all global GDP rankings and where timber is one of the few existing resources, policy makers often have particular interests in logging industries. Power dynamics and potential cases of collusion between decision makers and industry stakeholders have to be put under the spotlight.

However, demand driving forces in importing countries have to also be acknowledged and scrutinized to promote more sustainable and environmentally responsible trends in the import, manufacture and consumption of forest products.

We cannot expect initiatives such as REDD+ or others, which are inserted in a broader corrupt system, to deliver effectively and fairly without holistically addressing the underlying context with anti-corruption and good governance measures that go beyond the forestry sector.

Law enforcement is the last but fundamental step at the end of the anti-corruption cycle. Success in anti-corruption work implies aiming high when it comes to prosecution. As Estelle Fach of the UNDP stated: “it would be a mistake to only target the little guys at the bottom”. We also need to make sure that companies which are knowingly importing illegally harvested timber into Europe and beyond are held to account.

Only through a combination of all these elements, can corruption in the forestry sector be effectively tackled.

At Transparency International EU we are working in coalition with a range of civil society organisations to push the EU to better promote forest governance and trade in legally sourced timber through its FLEGT Action Plan (Forest Law Enforcement, Governance and Trade) as well as to strengthen the enforcement of its Timber Regulation, prohibiting the import of illegally-harvested timber into the single market.

What is the problem? REDD+ is a UN-initiated scheme aimed at shifting the forest economy from short-term profit to long-term security by offering financial incentives to forest-rich countries to hold onto their woodland. It refers to “reducing...

The link between corruption and deforestation and forest degradation has been almost universally recognised. Today, corruption continues to threaten new climate initiatives like Reducing Emissions from Deforestation and Forest Degradation (REDD+). This report provides the summarised findings of corruption risk assessments in four African countries: Cameroon, Ghana, Zambia and Zimbabwe.