The most recent Special Eurobarometer on Corruption, the first since 2013, gives a good overview of the current state of corruption in Europe, through a series of surveys across the EU-28.

The Eurobarometer covers wide number of public and business attitudes and experiences around corruption in the European countries. However, the 2017 Eurobarometer does not contain many surprises for anti-corruption activists. Corruption is still very common in Europe and people do not feel safe to report it.

Just under three-quarters (73%) say that there is corruption in the national public institutions and that the measures against corruption are inadequate. Only a minority of all respondents say that there is sufficient transparency and supervision of the financing of political parties. One third (33%) of the respondents think there is enough successful prosecutions.

On the bright side: It is bad, but it’s not worse

1/ @EU_Commission has just come out with a special survey on public attitudes and experiences of #corruption in Europe. Here are some highlights (thread) #UnitedAgainstCorruption https://t.co/urSwGvSYWk pic.twitter.com/aXV31jaAdm

No Country for Whistleblowing Men

Whistleblowers are important players in national and global efforts to detect and prevent corruption and other malpractice. But reporting often comes at a high price: people who speak up risk their careers and sometimes their personal safety to expose wrongdoings that threaten the public interest. They need legal protection against retaliation, but also a supportive environment at the workplace itself and in society at large.

The Eurobarometer is a reminder of the abysmal situation of whistleblowers. The majority of Europeans who experience or witness corruption do not report it. 81% of respondents say that they did not report corruption that they experienced or witnessed to anyone.

Nearly half of Europeans do not know where to even report corruption. The results are particularly poor in Bulgaria and Hungary. In these countries only around one in four respondents says they know where to report an act of corruption.

The Eurobarometer findings come on the heels of the Commission’s public consultation whistleblower protection, which echoes the troublesome situation of people wanting to report corruption or wrongdoing. The majority of the consultation respondents (85%) believed that workers very rarely or rarely report concerns about threat or harm to the public interest, with fear of legal and financial consequences being the top reasons for not doing so.

Most EU Member States do not have dedicated legislation in place, and even in the few countries where such laws do exist, they usually leave significant loopholes and fall short of good practice. As a result, European citizens remain largely unprotected in case they take the decision to speak up, facing the risk of retaliation, judicial proceedings and dismissal. The Eurobarometer serves as a stark reminder why this situation needs to be addressed so that whistleblowers are afforded proper protection to speak up and report corruption.

The European Commission is now assessing the scope for horizontal or further sectoral action at EU level to protect whistleblowers. The Commission recently published an Inception Impact Assessment and the aforementioned public consultation found there was very strong support for minimum standards for whistleblower protection being codified in the EU law (96%).

This Eurobarometer shows that now is the time for the European Commission to come forward with a robust and comprehensive proposal for EU horizontal legislation on whistleblower protection if its serious about fighting corruption in Europe. 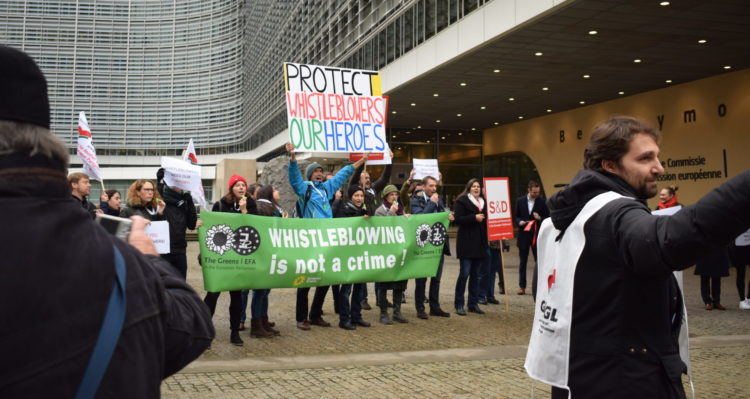 MEPs protest in favour of Whistleblower protection outside the European Commission in Brussels, 5th December 2017