One year after the implementation deadline of January 2020, nine countries have failed to establish public registers, while others impose geographic access restrictions, in clear breach of EU rules. More generally, most EU countries have introduced barriers such as paywalls and registration which, although legal, make it hard to consult the registers.

“It is no secret that anonymous companies are the vehicle of choice for the corrupt and criminals” said Maira Martini, Research and Policy Expert, Transparency International “the lack of public registers and the difficulty in accessing information in some Member States tells us that the flow of dirty money is still a real risk for the EU as a whole” she continued.

While most countries have some form of register, Hungary, Italy and Lithuania are yet to create any type of system. Six countries (Cyprus, Czech Republic, Finland, Greece, Romania and Spain) have a register, but have not made it publicly available. Seven countries also impose a fee for consulting beneficial ownership information and other countries charge fees to access supplementary information. Significant restrictions to access beneficial ownership data were also found. In Belgium, Croatia, Portugal and Sweden, for example, access is restricted to nationals and to citizens from a handful of other EU countries, meaning foreign competent authorities and members of the general public outside these jurisdictions cannot access the information.

“The success of a beneficial ownership transparency framework really boils down to the quality of registers and their usability by domestic and foreign authorities and the public, particularly civil society organisations and the media.  In these areas, EU Member States are not stepping up to the plate” said Laure Brillaud, Senior Policy Officer, Transparency International EU “What we really need to see immediately is for the European Commission to review implementation of the 4th and 5th EU Anti–Money Laundering Directive by Member States and sanction any non-compliance found.”

Transparency International is calling for the Commission to propose, as part of the forthcoming anti-money laundering rulebook, a set of guidelines to improve the availability of beneficial ownership data across EU countries as well as to facilitate the interconnectivity of registers across the EU, including:

At the same time Transparency International has written to EU Commissioner Paolo Gentiloni, urging him to push for stronger global standards on beneficial ownership transparency as part of the upcoming review of Financial Action Task Force (FATF) recommendations. Progress in tackling the use of anonymous companies will only be possible if information about beneficial owners is easily and available in a timely manner in all jurisdictions, and if authorities are able to make use of that information and cross-check data for investigative purposes. This issue should be high on the agenda of the G7 Finance Ministers meeting on 4-5 June.

The research can be read in full here and the letter to Commissioner Gentiloni here. Below an overview table/map is included. 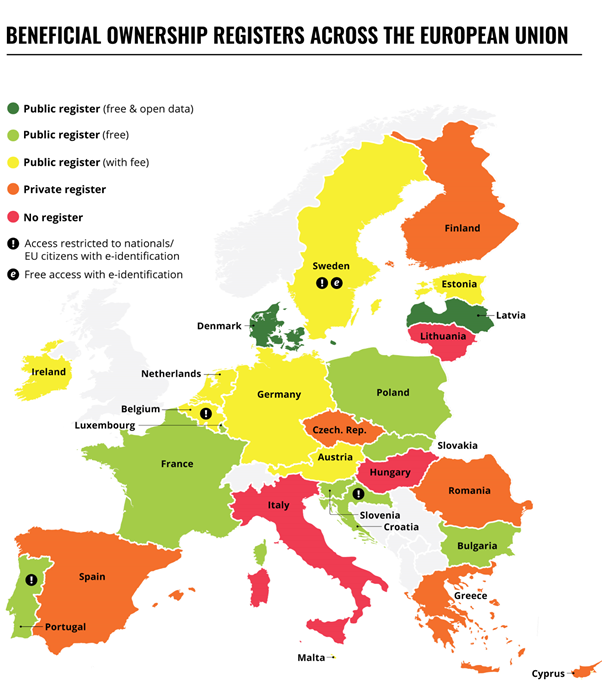