Two sides of the same coin?

Independence and accountability of the European Central Bank 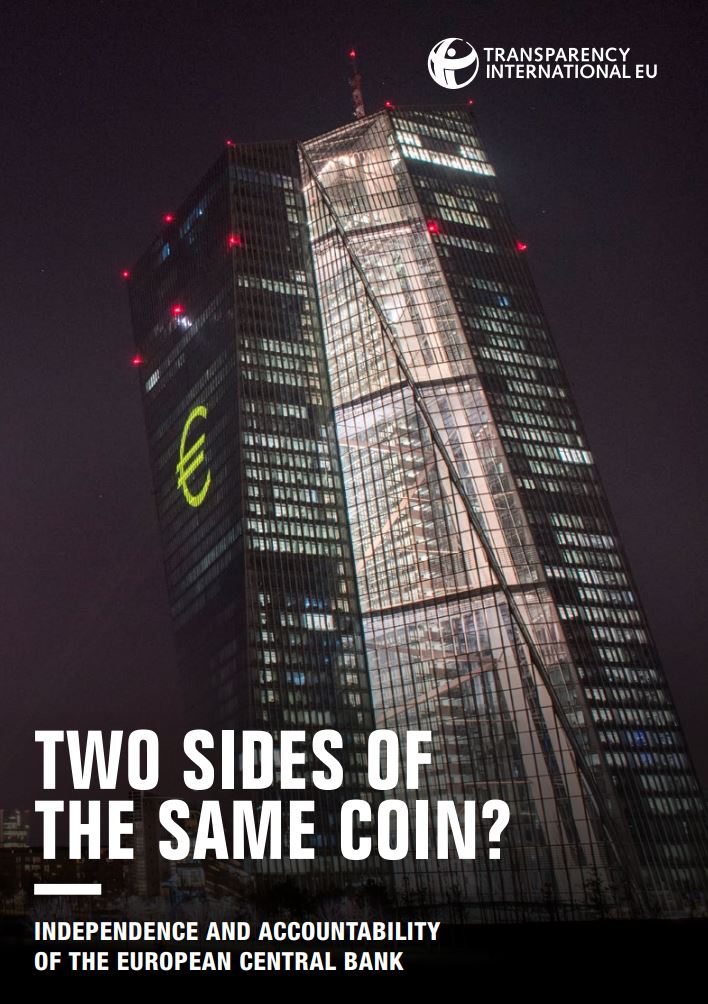 Our in-depth study looks into the balance between the ECB’s expanded mandate, its unrivaled independence, and its democratic accountability. It analyses the transparency provisions, which may compensate a lack of democratic control, and the ECB’s integrity framework, making far-reaching recommendations.

This report is published at a time when the ECB faces a major dilemma. Because political inertia has to date prevented the establishment of a sustainable institutional architecture for the Eurozone, the ECB’s role in safeguarding the euro is as indispensable as ever. The ECB emerged as the decisive actor in the euro crisis, with an extraordinary degree of latitude thanks to the statutory independence enshrined in the EU treaties: Governing Council members may not seek or take instructions from member state governments or European authorities to protect it from political interference. At the same time the ECB faces a significant decline in public trust, which alongside its expanded responsibilities put considerable strain on its accountability.

The relationship between the ECB’s independence, its mandate, and its accountability lies at the heart of this report. This arrangement is intended to ensure the legitimacy of a body that has deliberately been placed outside of democratic politics. Given its independence, the ECB’s accountability consists of answerability rather than democratic control: The President and the Chair of the Supervisory Board must report to the European Parliament and to the Council. Yet the extraordinary measures taken by the ECB since 2008 have tested the ECB’s mandate to breaking point, raising the question if its accountability framework is well adapted to this new era of highly interventionist central bank policies.

If independence is one side of the coin, the flipside is a narrow mandate. Following the example of the German Bundesbank, the Maastricht Treaty enshrined the principle of central bank independence and an unambiguous price stability mandate in EU constitutional law. Only if doing so does not interfere with price stability may the ECB also “support the general economic policies in the Union.” With the establishment of the Single Supervisory Mechanism in late 2014, the ECB now also has the objective to contribute “to the safety and soundness of credit institutions and the stability of the financial system.”

The first decade after the creation of the euro in 1999 was plain sailing for the ECB, and the robustness of this institutional arrangement was hardly tested. That changed radically in 2008, when the collapse of Lehman Brothers plunged the world into a global financial crisis. In the euro area, where it led to mutually reinforcing banking and sovereign debt crises, the ECB emerged as the dominant force in European economic governance.

Again, there are two sides to the coin when it comes to ECB crisis management. On the bright side:

And yet, each of these achievements has its flip side:

These developments amount to a significant expansion of the ECB’s role in the governance of the euro area. This leads to two fundamental concerns: central banks have been overburdened, and this is putting a severe strain on the institutional arrangement that underpins the ECB’s partial exemption from the principle of democratic accountability.

In addition to the uneasy balance between independence and accountability, this study presents a systematic overview of the ECB’s integrity framework. Improvements are needed in how conflicts of interest are managed; in particular, members of the Governing Council do not presently file public declarations of interests and assets, a standard precaution in economic and political institutions. Adjustments also need to be made to the Ethics Committee, which is chaired by a former ECB President and therefore not as impartial as it should be.

A particular risk is posed by the phenomenon of the revolving door. Many Executive Board members have gone on to accept posts in private finance, even while none of these highly accomplished civil servants had significant professional experience in the private financial sector prior to their Executive Board tenure. The behaviour of an institution’s leadership matters in setting an example to staff. Banking supervision presents a particular risk in this regard, and uneven cooling-off periods should be strengthened to ensure the integrity of the euro area’s new Single Supervisory Mechanism, including a transparent procedure to assess whether a particular post-office employment is in line with cooling-off periods.

Detection of conflicts of interest, corruption and other wrongdoing is also hampered by the outdated whistleblowing framework, which does not compare well to international best practices aimed at encouraging prospective whistleblowers to file reports. In the absence of an institutionalised mechanism for anonymous reporting, only two informants came forward in 2016, reflecting how difficult it will be to create a culture conducive to integrity. The ECB should adopt a new and public whistleblowing procedure with the option of anonymity.

Lastly, in view of the ECB’s discretion in supervisory practices, the wide-ranging impact of its purchases of private-sector securities, and its role in global regulatory bodies such as the Basel Committee on Banking Supervision, a much higher level of transparency is needed on the ECB’s meetings with lobbyists. An encouraging step in the right direction is the recent publication of Executive Board diaries with a three-month delay. But the ECB should go further and join the EU Transparency Register, and prohibit meetings with unregistered private interests. While meetings of individual banks with ECB supervisors pertain to regular supervision, it is clear that meetings with the European Banking Federation and national banking associations fall firmly within the scope of the transparency register.

Although significantly more ground is covered in the full report, this selective overview illustrates the key argument: While the ECB has done more than any other actor to save the financial and economic system of the euro area from collapse, its crisis-related activities went well beyond what its architects had envisioned as the central bank’s role, and require greater scrutiny.

The fact that the ECB repeatedly finds itself in situations in which its decisions can precipitate the disorderly exit of a euro area Member State points to fundamental structural flaws in the Eurozone. Our case study on the provision of ELA to Greek banks in 2015 shows that this type of ECB overreach is firmly built into the institutional architecture of EMU, allowing the ECB to use its power over monetary policy to exert pressure on Member State governments. This may happen again: Not only are Greek banks still borrowing under ELA, its volumes also increased in February 2017 after a period of relative calm, in the context of yet another standoff between Greece and its creditors over a review of its third ‘bailout’. The second case study on the re-capitalisation of Monte dei Paschi di Siena equally shows that the ECB has been drawn into highly political decision-making that belies its technocratic image. Often this has been done with the tacit support of national and EU-level political institutions, which are all too keen to shirk their responsibilities and let unelected technocrats to do the ‘dirty work’ for them. Here, the ECB should assert itself and not let its political counterparts off the accountability hook.

The ECB’s accountability framework is not appropriate for the far-reaching political decisions taken by the Governing Council. This can be mitigated in part by greater transparency in the ECB’s decision-making procedures. Making the single currency resilient and therefore sustainable will however require a more fundamental reform of Eurozone governance in general and of ECB accountability arrangements in particular. This should be addressed in the context of current debate on deepening EMU by 2025.