EU Employees speak to us about Barrosso Goldman Sachs move

Shortly after the news that former European Commission President Jose Manuel Barroso would take up a position as an advisor for Goldman Sachs on Brexit, 20 months after leaving office, an anonymous and spontaneous group of employees of the EU institutions launched a petition which has reached nearly 150,000 signatures. We have also sent a letter to President Juncker spelling out our concerns.

Employees of the EU institutions are not usually famed for taking a stand against their bosses or the way their institutions operate. Our Director, Carl Dolan, wrote to them asking why they decided to speak up, what they think about the Barroso case, and the wider crisis of trust the EU faces.

Carl Dolan (CD): Tell us a little about yourselves.

EU Employees (EE): It all started a few hours after the announcement that Mr Barroso was joining Goldman Sachs, a bank directly involved in the worst financial crisis since the 1930s. Several colleagues from all EU institutions immediately reacted, sharing their indignation and started writing a text in order to express this feeling of outrage and betrayal by our ex-President.

First we thought of publishing it, but we quickly had the idea to assemble people and particularly colleagues who had similar reactions. Then the idea of a petition came to mind, followed by the need to express our deep concerns outside the institutions and to collect external support.

CD: How did you feel when you first heard the news?

EE: Outraged. Betrayed. Slammed in the face. And then very worried about the disastrous image for our institutions, our project, our European future. After all the bad news about the future of Europe: the refugee and migrant crisis, the crisis unleashed by the Brexit referendum, the continuing economic crisis, and the crisis over the kind of Europe we want, this was the last straw. And there is a treaty, and rules which should apply to all concerned, in this case Article 245. How can citizens trust EU leaders if they shy away from their responsibilities?

CD: It’s not often that EU employees are so publicly critical of their former leaders. Why did you feel it was necessary to start a petition?

EE: For the need to express our indignation, to let people know that we are not like Barroso, and then to defend the image of the EU project, the EU institutions and of our daily work. It is also perhaps the beginning of something. We are fed up by misconceptions and permanent criticisms based on unreal facts and figures. We need also to defend the European project at our level.

CD: What kind of feedback have you had from your colleagues since the petition went public?

EE: I would say extremely positive. But there is an important fear of colleagues to embark on such a journey. Fear of the hierarchy or of other colleagues. The “internal institutional culture” is not at all used to these kind of actions.

CD: There’s been many cases of European Commissioners moving to the private sector via the revolving door. What makes the Barroso/Goldman Sachs case so different?

EE: Because Mr Barroso was not a “normal” Commissioner. He was President of the European Commission for two mandates, over 10 years. He was the face of Europe in all major European and International meetings, the G7, G20, UN General Assembly, etc. He had the unique privilege to defend European interests before the most powerful political, economic, financial, cultural, religious world leaders for over a decade.

CD: What do you think of the response from the European Commission?

EE: The formal response of President Juncker just arrived under pressure from the European Ombudsman. This is very, very late and it comes after a lot of important pressure from all parts. Is this normal? Is this what we should await from the EU institutions that are very well organised and full of extremely good professionals coming from 28 Member States?

We think no, European citizens deserve more explanation and transparency. The EU will only regain the trust of citizens if EU authorities show their real commitment to represent citizens and defend their interests.

CD: What do you think the Commission should do in the case of Barroso? 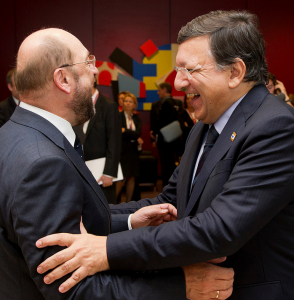 EE: The Commission should apply very strong and exemplary measures along the lines we wrote in our petition (cancelling his pension and all honours decorations) to make this example a symbol to help restoring European citizen confidence and to deter future similar temptations. We believe the EU should also strengthen its ethics, especially for the highest level representatives.

CD: What steps should the Commission take to prevent current Commissioners from doing something similar?

EE: To very seriously reinforce the code of conduct and its procedures. It should be automatically called for any ex-top EU officials willing to use the revolving door. To enlarge significantly the delay for joining private sector lobbying jobs (in Canada this is 5 years) and to be much more transparent in investigations.

CD: What would your final message be to EU citizens reading this interview who share your indignation? What should they do?

EE: Take action. “Do not let the other do”. All of us can change and relaunch the European project. Use all means of democratic and peaceful actions, such as petitions, letters and to your political and administrative leaders. Together we can make a change. Together we can make this case an example and deter future leaders from entering into dirty business after the end of their public mandates.