At Transparency International EU we believe whistleblowers should be protected not persecuted. They are essential for exposing corruption and wrong-doing. That’s why we’re calling for EU-wide whistleblower protection. As part of this call, today on International Anti-Corruption Day we are showcasing the story of one recent whistleblower.

Two weeks ago a young civil servant came forward to expose alleged corruption at the heart of the Slovak Ministry of Foreign Affairs while working on the Slovak Presidency of the EU, which ends December 31st. With support from Transparency International Slovakia, Zuzana Hlávková has been at the centre of a media storm around what she has revealed. We decided to give her a call and hear her story.

Transparency International EU (TI EU): Hi Zuzana, thanks so much for talking to us. Could you tell us a bit about yourself and what you uncovered?

Zuzana Hlávková (ZH): I was an expert at the Ministry for Foreign Affairs (MFA) working on cultural presentation and cultural events in Brussels, Slovakia, with the EU institutions and I was also responsible for smaller projects, cooperation with NGOs, schools and regions and cooperation with the Dutch Embassy [the Dutch Presidency preceded the Slovak one during the first half of 2016].

I was part of a small team so we all knew what we were doing and what problems we were facing. The atmosphere was very open, that’s why the core team knew about everything that was going on.

After a few months working at the MFA, Zuzana Ťapáková, the former director of a big private TV station Markíza, was hired as a media advisor at the MFA. She started getting involved in the projects of our Department, such as the cultural events, where the budgets had already previously been set and agreed by the Ministries of Culture and Foreign Affairs. Things started changing after her arrival, with initially modest events transforming into big and costly ones. For example, the two opening concerts in Slovakia for the public and VIP guests. The initial budget for the concert for public was €20,000, but it evolved at one point to more than €200,000. We did not really know what Ťapáková’s role at the Ministry was. Upon leaving the Ministry, I confronted Minister Lajčák with my concerns at a meeting. Among other things, he told meshe had been sent by the Prime Minister Fico in order to make use of her.

The left image is of the Smer party video and convention, and on the right is the Slovak Presidency logo video and ceremony. Sources: smertv.sk, rtvs.sk

She was also pushing for a spectacular presentation for the unveiling of the Presidency logo. She pushed for it to be organised before the national elections in March. It intensified in December 2015. To demonstrate the idea of what the event should look like, our superiors showed us a video of the national convention of the [then governing] Smer party. This is where we understood that it was somehow linked to the Smer party. But we didn’t believe the event would actually happen.

However, during Christmas break, my colleague started hastily working on the documents for the event. She quickly drafted the assignment of the contract and sent it out to three agencies who were pre-selected in advance. The MFA has refused to this day to disclose which agencies were chosen, stating that: “we cannot disclose their names”. The Ministry asked for their offers on a very, very short notice and the Evka agency was selected automatically with their concept for 156,000 euros.

TI EU: And what was the agency contracted for?

ZH: The Evka agency was supposed to provide the full-scale production of the event. But in reality it was our people who, to a large extent, covered both the logistics and preparations. In the process, we found out that the artists were to be paid by the MFA instead of the agency. The MFA also paid for the premises which were supposed to be covered by the agency. According to the information from my colleague who worked on the event, the overall cost was more than €300,000. [On February 16 2016 Zuzana submitted her resignation from the MFA effective March 1 citing the “execution of public procurements which is not in the interest of the state and the general public whom we had the ambition to serve with my colleagues.”]

TI EU: Is it true they changed the threshold for public procurements to do with the Presidency?

ZH: Yes, it was not specifically related to culture but it was an exemption to provide goods and services that would be very difficult to procure under normal rules. Unfortunately, in many instances the exemption was simply misused and abused like with this presentation event.*

TI EU: Do you think it was a deliberate move to establish this exemption ahead of the Presidency?

ZH: It’s very difficult for me to say. I’m sure they had real practical and political reasons. But they also used it in their own favour. Even if there are real tangible reasons, from my experience, in several cases it was abused of.

TI EU: So do you think what’s been happening over the last year shows why you need strong procurement rules?

ZH: I understand the need for flexibility. Slovak laws are very good but the problem is the execution. The mentality is wrong and people are not enforcing the laws properly. It’s not the laws but the people that are the problem, I think.

ZH: Yes, absolutely. Transparency International Slovakia have been asking for months for documents that the Ministry has declined to provide. It’s difficult to say that they are outright lying but they keep misleading us. We asked very concrete questions without receiving concrete answers. They said that the logo event, for example, was fully covered by the agency, even though that is clearly not true. Following the event the Ministry initially claimed to the media it cost €200,000 altogether. When we came out with our suspicions in November, they changed it to €245,000, including the actors’ fees. But, to our knowledge, this is still not the final cost of the event.

TI EU: Did you feel safe coming out as a whistleblower?

ZH: I felt safer with Transparency International on my side. I didn’t fear for my life, but maybe for more subtle problems with my career, my family etc. The government’s reaction was that we’re attacking Slovakia’s EU Council Presidency. That’s absurd. On the other hand, the public responded very positively, students started petitions, we received countless messages of support. I even received several job offers.

TI EU: Is it risky for your career at such a young age?

ZH: It just happened at this age and this time of my life. I don’t question why now. It just happened. And it was time to stand up for my convictions and what I believe in.

TI EU: What do you think the EU can do to stop it from happening again? What lessons can we learn that we can apply to future presidencies?

ZH: There must be a way for greater transparency. The EU has to find a way to control its finances. One of the big problems here in Slovakia and the wider region is that people know that the EU sends lots of money and that it is good for us. But then the EU bodies don’t care about controlling where those funds go. They don’t care where the money ends or how it is spent, so our political elites can distribute it however they want.

TI EU: What are the next steps, now you’ve come forward with this case?

ZH: With Transparency International Slovakia we’re thinking on how to work on more with this topic and help people who are in a similar situation. I personally see myself working with young people, talking about what corruption means and how difficult it is to recognise. Transparency International Slovakia would like to set up a safety network for people from the public sector who want to come forward and denounce corruption. There is a stigma around whistleblowing here in Slovakia, people fear for their jobs, their families. That no one will help. I think they also fear that the media will somehow destroy them.

TI EU: Have you felt that there is any media pressure against you?

ZH: Not really, but when you have no experience you really don’t know how to act around the media. You know what to say and how to say it, but sometimes they can push you to positions you do not feel comfortable in. Transparency International Slovakia’s help with the media was very important for me, it was great to have someone to consult and talk about the wider situation.

TI EU: Do you think this has created a wider debate about corruption in Slovakia because of your story?

ZH: There was already a huge debate on corruption because it’s such a big problem. People are frustrated. What I feel from the public is that it gave them some sort of hope that someone can come forward and maybe more people will do so as well. But, I don’t think this is an exceptional case. People want hope and want more people to stand up to the political elite that have been messing with our resources for years on end.

You can find Zuzana’s full testimonial and resignation letter over on Transparency International Slovakia’s site here.

Transparency International EU along with 61 civil society organisation are calling for EU-wide whistleblower protection. Join us in calling for whistleblowers, like Zuzana, to be protected with the same standards across the EU by signing this petition: https://whistleblowerprotection.eu/

* The contract was processed through an exemption from public procurement law (the Slovak Presidency Exemption), which allows purchases for Presidency-related activities that do not exceed 162,000 euros (VAT included) to be done without a public tender. 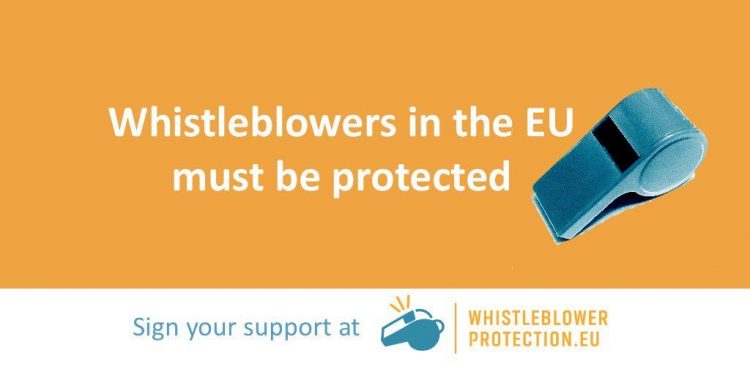